History of the Walk 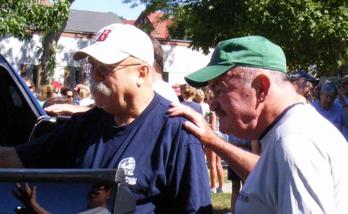 The first Walk was held at Guv Fuller Field and benefited the Babe Ruth World Series. Fifty walkers signed up at Lawrence’s Restaurant. The next day the first annual Falmouth Walk stepped off at the Heights by the Casino and followed the route of the Falmouth Road Race…in reverse! The group took the bike path at Surf Drive to avoid the roads and finished in Woods Hole at the library. Tommy had arranged for a bus to take everyone back to Falmouth. Unfortunately, the bus arrived almost two hours late but a good time was had by all. Forty-eight hours later, “Bob” obliterated the bike path and Surf Drive, with widespread damage throughout the town.

TL and Eddie’s experience raising funds for charities goes back to their days working in Boston. One such event was called “The Bull to The Eliot.” Beneficiaries included the Jimmy Fund at Dana Farber Cancer Center, and Halcyon Place, a home for families of loved ones being treated at Shriner’s Burns Center at MGH. It was a one-mile bar to bar jaunt along the beautiful Commonwealth Avenue mall which featured about 150 runners and a celebrity guest of honor riding in a limo, of course.

The last “Bull to the Eliot” was run to benefit a young man named “JP” who worked at the Bull & Finch Pub. He had finished his evening shift and was riding home on his bike when he was struck head-on by a car. A star goalie for the Boston University Hockey team, JP had many friends and a caring family from Wisconsin that stayed by his bedside as he lay in a coma. In the meantime, TL and Eddie began to put their plan for a benefit run into action. Hundreds gathered at the Eliot Lounge that night: NHL players, Coach Parker and all of JP’s teammates, Harvard and BC coaches and players, media celebrities, City officials, Boston restaurant workers, and of course, JP’s family. This was a very, special night indeed.

With positive experience to build on, TL and Eddie wanted to make the Falmouth Walk a special Cape Cod family event. As time went by, a strong group of friends solidified the committee. Many local businesses have generously donated items for the post Walk auction and picnic which has become the highlight of the program and a wonderful way to celebrate its conclusion.

We have also been blessed to have friends provide enormous support all these years. For years the Falmouth Road Race has provided all the beautiful T-shirts for the participants. Others include Smitty’s Ice Cream, Jack in the Beanstalk, Sam Adams Beer Co., as well as The Quarterdeck Restaurants. St. Barnabas Church has graciously allowed our participants and volunteers enjoy a family picnic and raffle on their beautiful grounds.

Each year several local charities have benefited from the event: youth groups, senior citizens, medical support organizations, and others. All are worthwhile organizations trying to make a difference in Falmouth.

The Falmouth Walk is now part of the town’s summer landscape. Neither rain nor steam heat prevented folks from stepping off for a good cause. Last year, 744 walkers walked the event. All the festivities, including the Friday night registration, the Walk and picnic, officially qualify as an annual family tradition… just like a Smitty’s ice cream cone on a hot summer’s day. Karen Mahoney and her family have documented the event every year with an album of photos and 29 years of commemorative T-shirts.

Following the picnic, Eddie can be found in the Quarterdeck, raising a pint of Sam Adams and toasting everyone who helped to make the Falmouth Walk another successful “job well done.”